Many Shades of Hue 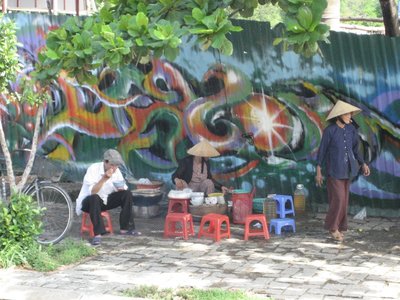 A small street-food spot in Hue set up against a colourful, graffiti backdrop

We got to Hue Train staion and saw sign that said Orichad hotel. got to Hotel. Very nice, warm welcome. let us have breakfast. saw room. Big, clean, large bathroom. watched T.V. Had lunch at la carambole and saw river. went back to hotel, rested, got Mr. Beans Holiday, rested. Had dinner at Ushis and got pringals and watched Mr. Beans Hoilday. Good night (teddy).

We slept with an old Vietnamese man last night. Well, shared a cabin on an overnight train with him. For a family of three, there's always that fourth berth to worry about. He turned out to be quite a health nut: up every two hours for a cigarette in the hallway, rising at 4:30 AM to eat (noisily), followed by a nice can of beer at 7 in the morning. The train itself was in the worst condition of the ones we've been on. "If this is soft sleeper..." is the obvious running joke. It's motivated Jenn to find a cheap flight to Ho Chi Minh City rather than face a fifth night on the train in just over 2 weeks.

Pleasant, however, was our arrival in Hue. Someone from our hotel picked us up for free, and we found that the Orchid Hotel is yet another lovely budget hotel. It's that rare room that's even nicer than the lobby. They encouraged us to have breakfast - no extra charge - before we even checked in. We found out later that our room is one of just two suites they have, a free, un-asked for upgrade. The staff here also have a great sense of humour, which was quite surprising at first.

We explored the next street over and found it lined with cafes and restaurants - just what we needed for lunch, then a nice dinner later, with very little in between except a walk to the riverfront and some rest in the hotel room. Hue seems so much more wide open than Hanoi's old quarter, and also quieter. Another nice thing about our hotel is that they have free DVDs, and a player in each room, so we took advantage and watched Mr. Bean's Holiday. Hey, we're better travellers than he is!

We had breakfast and met tour guy who lead us to our boat and went to pagoda temple with some cool things. Then we went to a place where we had to ride [on] motorbikes and I diden't want to but I said ok. As I reasiled we had to go fast and downhill. So I burst into tears before we could get any further. I said no. So Mommy said to the driver sorry and we got to sit down and have drink and watched and talked with the faimly who was selling them. Saw dog, chicks, etc, turkey, and chicks. And then they got a box and inside were the littlest kittens I had ever senn. Her: "one week old." Me: "Wow, neat." I got (because their mother wasn't their) to pet and pick them up. Had lunch, went to see some tombs, and to our hotel. had dinner and watched Evan Almighty (so Daddy could finally see it). Good night.

We booked a boat tour to some of the sites today. The Perfume River doesn't live up to the romance of its name, but at least it doesn't stink either. We were once again daytrippers in a United Nations of tourists, and all nationalities realized how we got ripped off for small hidden costs at every turn. Oh well, just a nuisance, really. The tourist boats are run by families who also live on them, and our tour guide was a qualfied teacher who told me that teaching doesn't make as much money. 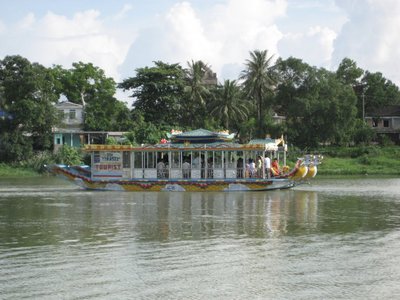 Our ride took us past other family house/working boats, some of which seemed to be employed at pulling weeds out of the river, or hauling dirt around. 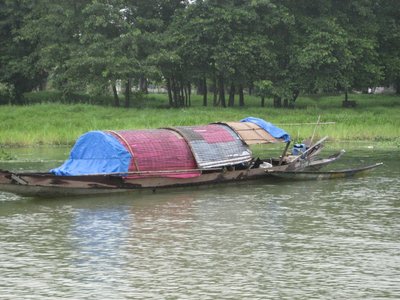 So, by tourist boat, we saw the Thien Mu Pagoda first. 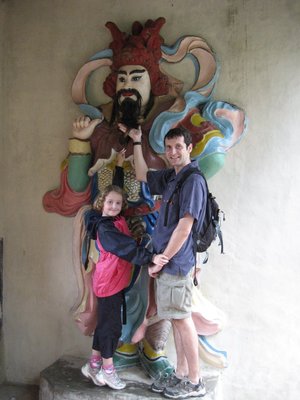 It's most famous as the monastery that trained the monk who set himself on fire in Saigon to protest the war. They now have his car, which he drove from Hue to Saigon in 1963, as a relic. Below is a picture of the car, and of his self-immolation (notice the powder-blue Austin in the background). 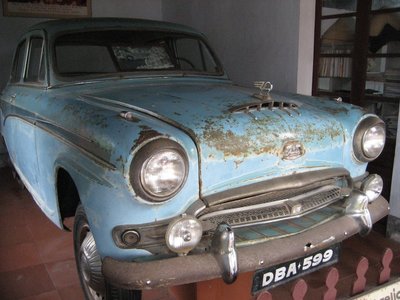 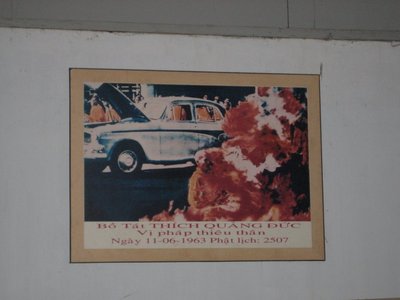 Next it was a selection of Royal Mausoleums. There are several Nguyen dynasty emperors who chose "auspicious sites" just off the Perfume River. Unfortunately, the first one required a short motorbike shuttle, so Jenn stayed back with Anica. I was whisked away to see the Mausoleum of Tu Duc, which was built between 1864-1867. It was unusual in that Tu Duc was poet and a romantic who built an asymmetrical grounds for himself. The standard autobiography carved into a stele (tablet) was also very self-critical, as he felt he was losing Vietnam to the French and his slave labourers hated him for building the Mausoleum so fast.

As I did this, Jenn had an interesting conversation with a local family. "How old are you?" "38," Jenn answered. Much whispering, then somone told her, "By now Vietnamese women maybe have 10 babies!"

The Mausoleum of Minh Mang, which we saw after a forgettable (or maybe un-forgettable lunch) was a stop we all enjoyed. It was easy to see the symmetry of the Mausoleum's layout, reflecting the order of this emperor's reign (1820-1841). 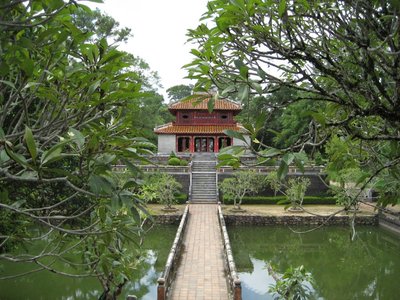 One of the details we liked was the pair of "nee," (I have no idea of the spelling, actually) a mythical animal that eats unwanted ghosts. They are brothers to the dragon, apparently.

The Dragon's Brother, eater of ghosts

We were back at the dock in Hue right at 4 PM, an eight-hour trip, and we went for an early dinner and then another DVD from the hotel's large, mostly-pirated collection.

Today we walked over to the past Hues' Forbidden city and looked around. Most destroyed, but who cares, its great. Tour group of high school students there, and many mini models of palace. Wanted to go to market, but said no and had lunch. Walked back over bridge to hotel, looked at movies and saw Trasformers. Me: "okay, okay, okay." Them "we'll bring it up." Rested till I really got the party started (by doing rock star moves) for the last two hours. Had qucik diner at Ushi's, got pringles and watched Transforemers. 2 hours and 20 min! Good night.

Thirty degree plus heat greeted us despite the early start this morning, the first time we've had a wilt-inducing temperature in a couple of weeks. We were off to "The Citadel" (or 'forbidden city lite,' you might call it), Emperor Minh Mang's 19th century royal enclosure largely modelled after Beijing. 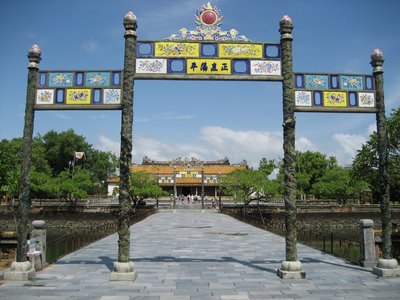 Nicely-restored part of the Citadel, just inside the South Gate

Despite being a royal residence until 1945, much of it is in advanced disrepair. Weather and warfare are to blame. What's left is fun to explore, even the overgrown parts, and some key buildings are fully restored and kept up. The moats and walls are very impressive. 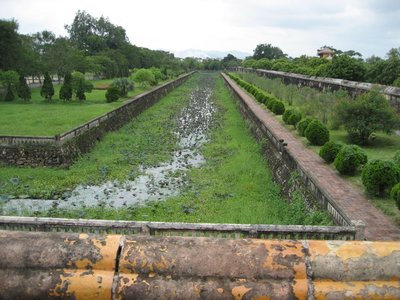 Moat at the Citadel, Hue

Another hall is supported by 80 two-tonne wooden columns painted yellow and red (imperial colours). We didn't see much of evidence of why the Mandarin halls were once called the "Forbidden Purple City." Anica liked feeding the already over-sized goldfish in the pond just inside the south gates. They swarmed and climbed over each other in a frenzy to get the food. 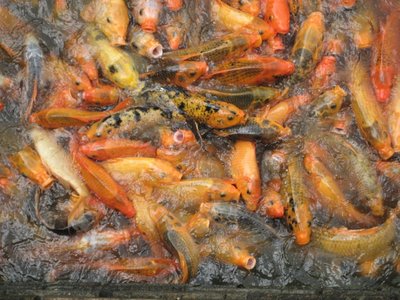 Our own appetite was sated at the tastefully-named "DMZ Cafe", where the pizza was so good that we ordered a second.

We have officially done all there is to do in Hue as of mid-day today. That''s fine, since we deliberately cut out a stop in Hoi An to slow down our pace and have some quiet afternoons and evenings. Hue is actually a charming city of just under a million people, although it seems much smaller than that. Today we walked - wandered really - to see what the city was like off the beaten path. As usual, this was quite rewarding. The cyclo-drivers vanished within a few blocks of the riverfront, and so did all the other tourists/Westerners. People we passed broke into huge grins and gave waves and "hellos." Chancing upon a wet market, we had to prepare Anica by reminding her that people in the crowded market will try to touch her and talk to her. She held up great, and we got to move through the fish-heads, shrimp and exotic produce, then follow a laneway out of the market to see more of "hidden" Hue. After three hours out walking around, we feel we saw a lot more of the city than some visitors do. Having now been all over Hanoi and Hue, we've also noticed that Vietnam is the first country we've visited that doesn't have the Western chain food big four: McDonalds, Starbucks, KFC, and Pizza Hut. I wonder if that's true in Ho Chi Minh City, too? 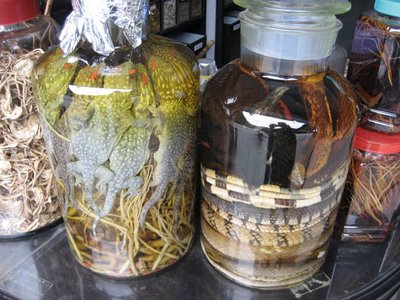 No KFC in Hue, but look what you can get pickled in a jar at the corner pharmacy!

Posted by jennrob 00:11 Archived in Vietnam

Hi--our compliments to all the writers again! Loved the pics, but will pass on the snakes & frogs! We agree with you about seeing the "real" cities by walking the out-of-the-way areas. Hope the heat isn't too bad for you.
Much love & hugs, H&D

Anica, one week old kittens! How great that you got to hold and pet them! And you also saw a turkey and chicks. I bet that was fun. Much better than a smelly motorbike.

Rob, the Mausoleums look so lovely and peaceful. I'd so much like to be there seeing it all with you. The frenzy of gold fish is almost scary but I love the corner pharmacy! I'm sure you don't miss the big four ~ especially with such delicious pizza at the DMZ Cafe. ;-)

I guess I could Google this, but... the pickled offerings at the corner pharmacy-- were those for medicinal or culinary purposes? Just curious.
Gorgeous pictures, as always! So colorful.

Anica....don't worry about not wanting to ride on the motorbike...I wouldn't either! Sounds like Vietnam is very interesting and different. Did you try any local delicacies? JBWL xoxo

Jean - I tried pork caramel, some noodle dishes, many kinds of spring rolls (some with crunchy noodles wrapped around them)-Anica

Loved the information on Hue! Certainly glad your over night guest wasn't on the train from China, as we probably would have bunked with him! Thursday we met a family from Seattle when we went to visit an orphanage. We had so much fun holding and playing with the babies. Sat. we went to the Perfume Pagoda, even taking the cable car we went up 350 steps; and down. Our plane l;eft Hanoi at 11:30, early in the moring found us in Seoul, the afternoon was spent in Toyko, and we landed at Sea Tac at 9:30. I went to bed at 4:00pm since I had only had a short nap on the plane trips. I am already planning our next trip in a few years. Anica: Julia and Jaclyn read you entry and were just going to make a comment when the power went out!

Sherry - glad to hear you guys got back safely and finished the trp on some high notes. We're still in Vietnam, but when we go somewhere exotic (for you), then Anica will send a postcard. - Rob

Thanks for all your comments, hun. Pickled offerings were for medicinal purposes *makes face* Lots of snake wine on offer though. That's a little more culinary /but/ we were told it was for "manly" so maybe not :P