and meeting up with Jenn's Dad! 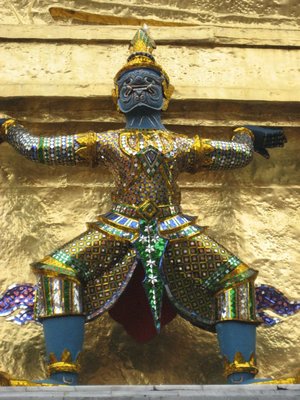 A detail from the dazzling Wat Phra Kaeo complex, Bangkok

It was back to the big city after our nights in Chiang Dao. For the whole day before we arrived in Bangkok, Anica kept saying: "Guess who we're seeing tomorrow? Poppa!" over and over.

We did indeed meet Jenn's dad (a.k.a. Poppa) in Bangkok, as planned. Sort of. He didn't stick around the hotel to wait for us, and instead we caught up with him at a huge, glitzy shopping cente called the "Siam Paragon." Getting there gave us our first taste of rush-hour Bangkok traffic, where a 6 km taxi ride can take the better part of an hour.

Anica had her moment of yelling "Poppa" and running into his arms, and then our little three-person travel unit became four. We will see Bangkok, Cambodia and India together. Jenn and I knew that this would be a major adjustment after being on the road for two and a half months, but definitely worth it to share these experiences with (more) family.

That very first night in Bangkok Jenn's Dad treated us to an unforgettable dinner at the Banyan Tree hotel's rooftop restaurant. This is 61 floors up...and open-air. We were there at sunset and it was stunning. Then, to cap off the evening, we went to the night market just up the street, which was surprisingly upscale in selection and chic in appearance. 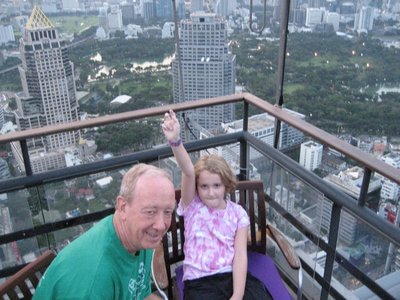 Our time in Bangkok has seemed short, but we've managed to do a few things between snail's pace taxi rides (which were still the cheapest way for four to travel) and thunderstorms (which never lasted as long as a taxi ride). We braved the incredibly tight alleyways of Chinatown looking for bargains, for instance. We ate some good Thai food, once near our hotel, once at a food court, and once at a tapas-style restaurant (called "Thaipaz", get it?) which was so difficult to find we nearly gave up.

And of course we saw the Grand Palace and the Wat Phra Kaeo royal temple complex. This was truly beautiful. Built in 1782, it is so well-maintained that all of shines as if new (what a contrast to the 1804 palace in Hue, Vietnam - now mostly in ruins). The colours are amplified by all the glass, which itself looks like jewels. 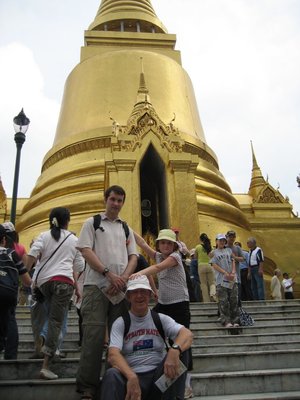 I don't know how much I learned about Thai Buddhism or the monarchy, but aesthetically, this was everything you could hope or imagine to see in a royal palace and temple grounds. Again, the word that comes to mind is dazzling. 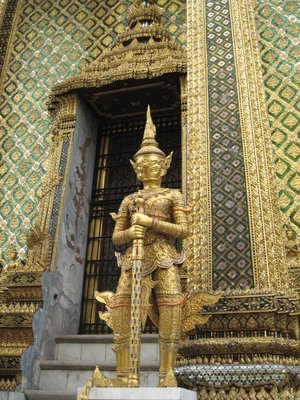 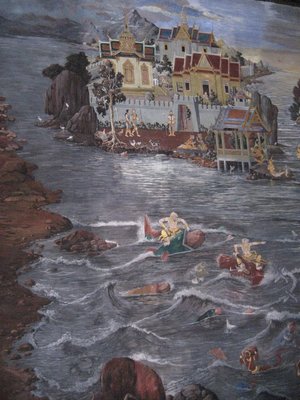 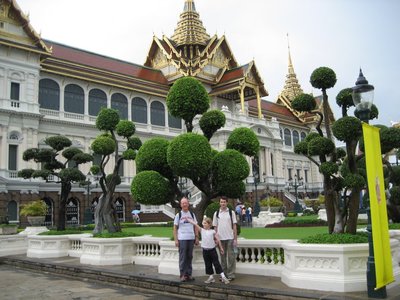 Outside the Grand Palace

Fortunately, too, today, we decided to take a combination of the Skytrain and the ferry-boat back to our hotel from the downtown core. Yes, it did cost more than a taxi, but not by much, and the "Central Pier" ferry trip was a great Bangkok experience. We rocked and whooshed our way back and forth across the river through 13 stops, and when we finally got off, we just walked down an alleyway, and were practically in front of our hotel.

Now, we'll see about getting from here, overland, to Siem Reap. Bangkok has really been just warm-up. Welcome aboard, Poppa!

Today we got to Bangkok after a hour and a hald drive from Chang dao nest and a hour and 10 mins from Chang Mai airport on Air Asia. After a pretty long public taxi ride to New Siam II hotel, when we got to it Poppa wasen't there yet so after a couple minutes, poppa called us and said (on phone) "I'm at the Siam Paragon just at a starbucks at the front. So we got a taxi down and met Poppa and had a good dinner at a fancy restaurant with a kids meal

After that we went to the night market and went to sleep. Good night.

Next day we went to mommys densit and we shopped at Central, then we went to Chinatown to look around and went thourh a really "busy" market and went to a tourist street close to our hotel and had lunch at a place showing Harry Poetter and the order of the phoenix. after we went to our hotel to go swimming and had dinner. Good night.

Next day we went to the old palace (not as insreting as Beijings) and got rained on. then took a taxi to Siam Paragon and had a good lunch. Then we took a sky train to the boat peir and rode it to our closet peir and had dinner. Good night.

Posted by jennrob 08:18 Archived in Thailand

Hi guys,
Don't know if you have already but read the Fleming family's account of trip from BKK to SR - they have some good tips. Our email is fourgortw@hotmail.co.uk so drop us a line there - I can't work out how to pm you!!
Booked train from Udaipur to Delhi last night and will arrive on 29/10, so see you then!!
Rachel xx

Anica, I hope you enjoy every minute with Poppa. It sounds like you are all off to a great start in Bangkok.

Stevie and I had a wonderful time in Buenos Aires. We loved the neighbourhood our apartment was in ~~ Recoletta.

Enjoy Cambodia and India. We'll be looking forward to the next posting.

Rachel - we often have read the Fleming family adventure; they've been a bit of a role model for what we're doing! (Rob)
Helen - nice to hear you're back safe and sound. Send us some pics of your trip! (Rob)

Great photos, guys! It's nice to see the whole gang together. . .I'm looking forward to the next update.