The Cliffs of Insanity

Life on the edge in Varkala, Kerala (India) 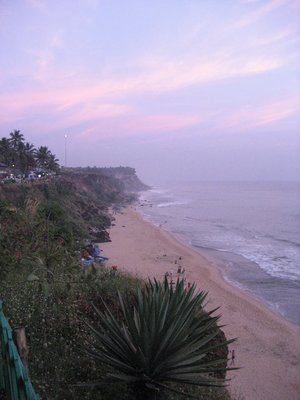 A beautiful drive down from the Cardamon Hills near Periyar (which unfortunately made Anica feel car-sick). Just six hours to cover 190 km! The Ambassador cab we were in had neither heating nor cooling controls on the dashboard. Of course, it got much hotter as we got closer to sea level.

On the way, we saw some of the pilgrims on their way to Sabrimala. We were still about 50 km away from it, but this is the second-largest pilgrimage in the world, so there was a fair bit of traffic. In a two-month span, over one and a million people (men only) will visit the Ayappan shrine. Whether they go by tuk-tuk, car, or bus, their vehicles are decorated for the journey, so the worshippers are very easy to spot.

We also drove by (more like through) a cattle market. We actually asked our driver to stop because it was such an incredible scene. There was cattle on both sides of the road, and hundreds in the gully below the road. Most of them had their horns painted to identify them, so, as it often is in India, the gathering was vividly colourful.

Our cab managed to negotiate the narrow laneways of Varkala and dropped us off right at the door to our guest-house, Villa Annamika. They have five rooms in their house, and ours was surprisigly spacious for just $18 a night. That even included an extra mattress for Anica.

A brief walk (less than 200 meters) got us to the "main drag" here in Varkala, which is a cobblestone sidewalk that runs along the cliff's edge. Below, down about 60 feet of red, volcanic rock is the beach. Very dramatic! And great views from anywhere along the cliff. All the restaurants line up, along with the usual souvenir stores, etc. for a view out the Arabian sea. 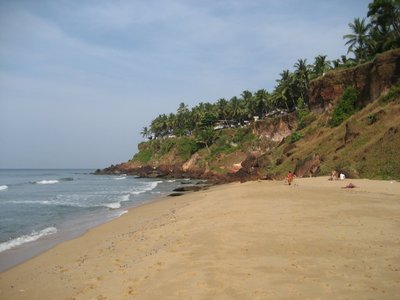 Unfortunately, there's a sameness to these restaurants, in both menu and decor, which are pretty much just for tourists. Also, both the stores and the restaurants have their "touts" out front, trying to entice you in to buy. Especially with the souveir stores, this just annoys us. There's really no chance we're going to buy a cheap trinket and either carry it around for months or ship it home. So, as we stroll along the cliffside, we have to use our strategies for fending off touts and hawkers that we've honed these past four months. The best one is probably to just pretend you're deaf and say nothing at all. But what fun is that? Jenn prefers a strong, clear "NO," while I like to be more creative. But that sometimes backfires on me. From our time on Nathan Road in Hong Kong, I came up with a response to the calls of "Hello Rolex," etc. My response would be "Hello maple syrup," because that's a typical Canadian tourist product that's representative my homeland. It did tend to cofound them. Here in India, the hawkers often ask if you "like" what they're selling, as in "do you like wooden flutes?" And I'd say, "No, wooden flutes killed my brother." The first time I said that Anica said "You don't have a brother!" so I had to say, "yes, because of the wooden flutes." But soon she caught on and thought it was funny. Yesterday, out walking in Varkala, a man asked me if I liked small drums. "No, small drums killed my brother," I responded. Like a good drummer, he didn't miss a beat. "I have a bigger one," he said. Wow. That's persistent.

Anyway, down on the beach, there's almost no hawking, so it's a very nice scene. You haggle for an umbrella rental and then you're left to enjoy it. The water's warm and clear, but can be rough. The waves are quite strong, so we played near shore with Anica, and at times it took both of us to keep her from being knocked over. After a couple of very full days at the beach, we suffered our first sunburns of the trip. Jenn stayed out of the sun completely for a day, and Anica and I only went swimming in the early morning and at sunset yesterday. Every day, we've run into the same family from Switzerland, whose little girl, May, is a couple of years younger than Anica. May doesn't speak any English, and Anica doesn't speak any Swiss-German, but they've had a great time with the waves and the seashells.

Today we got up, had breakfast, and ran upstairs, grabbed our stuff and ran downstairs to get in the car. After about half an hour in the car I started to feel motin sick which was weird because I had taken my (adult) gravol (adult because every pharmacy that we went to didn't have it). So after a long time of (acuttly felling barfy) I said "Mommy I'm going to lie down." "Ok." But it actully made me feel worse, so I told Mommy and she said "It's probbley the turn turn every now and then." "Mommy?" "Yes." "Can I listen to the i-pod?" "Yes." "Thanks." So I listened to the i-pod, and made a on-the-go of 41 songs! These are the artists: Bruce Spingsten, ABBA, Eva Avila, Avril Lavigne. So when we arrived at a (very nice) Villa Annamika, we checked in , looked at our room, and went on a walk. We saw the (nice) beach, saw a restarnt ad had diner. Good Night!

Today we woke up, put on our swim-suits and walked down the beach for breakfast (at Cafe Del Mar). Then walked down the beach and played in the water for a bit before reading Harry Potter and the Order of the Phoneix. Then well we were playing we met this nice girl called May. So we played with her. Then we had lunch, went home, rested, had dinner. G.N. (Good Night)

Yesterday we played with May, a girl we met on our first full day, in the waves, which was very fun.

The waves were so big they knocked us over 3 TIMES!

Thers this one restaunt called Sea Queen, but I prefer to call it Monster restraunt because they attack us to come in there restaruant every time we pass!

The girl who owns Villa Anamika does paintings and owns a dog.

Posted by jennrob 21:11 Archived in India

Great travelstories! I can just picture the cattle market. The hawkers have it down to a science in all countries. I suppose they talk about "us tourists" asmuch as we do ablut them.Did you hear of the man who lost both of his brothers, one to a flute the other a drum?
Jaclyn turned ten yesterday! This weekend they were in the production of Candy Cane Lane ar church. (It was 19 F when we came home Sat.) Next weekend dance recital.

Hi Jenn, Rob & Anica,
It must be very colourful with decorated cars & painted cattle! Rob's funny replies to the vendors were priceless--we were laughing also at Anica's comment about the Monster restaurant. Sounds so interesting & exciting to us. Keep the accounts coming; we love them!
LAH,
N&G, M&D, H&D xxxooo

dear family,
It's my birthday, hi this is Jfriend(jaclyn)!hope you have a very mery chirstmas!!!

Hi guys!
You are making Kerala sound very attractive - Hmmm, next time...
Sadie has taken to saying to vendors -'Do I look like I want to buy something?' which gets a far better response than anything we say!!
Take care, you must be off to Egypt soon?
All love CRFS xxxx