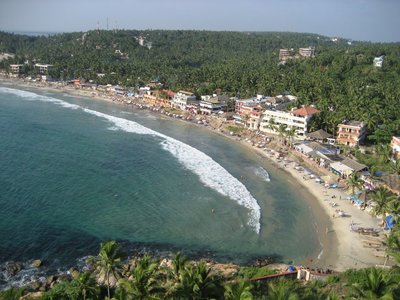 Kovalam's Lighthouse Beach, as seen from the top of the lighthouse

We moved a little south along the coast for one more relaxing week at a beach town in India. We are now in Kovalam, which has a completely different look to it when compared to Varkala. Kovalam is a series of four crescent-shaped beaches along a coast, bisected by a classic, red-and-white-striped lighthouse tower. The beach itself is, as advertised, not as nice as Varkala, but that's why we got a hotel with a swimming pool!

Getting door to door service from Villa Anamika in Varkala to Hotel Thushara in Kovalam proved technically impossible, because there are no roads wide enough for a car as you get closer to the beachfront in Kovalam. But, with only mild prompting, our taxi driver gamely got out, put on the biggest of our backpacks and started calling out "Thushara? Thushara?" and leading us along as various bemused locals pointed this way and that.

In a couple of minutes, we'd found our hotel, and thanked the driver. We'd also had an introduction to one of the fascinating features of Kovalam: the rabbit-warren of laneways that criss-cross the area between the beach and the western-most main road. They run in all directions, some like alleyways, with frequent ninety degree turns. Various properties are glimpsed as you go: small guest-houses, stores, homes...and the backyard of one may be the front of another, which could be across from the side of a third. On a later day, we actually set out to find our way back in a completely different way. Like rats challenging themselves in a new maze!

Despite all these buildings, hundreds of palm trees anchor the sloping hillside, rising up improbably between the densely-packed buildings. So, when we're lying by the poolside, we're staring up mostly at sun and palm trees.

The boardwalk is built up just three feet above the black-sand beach. These beaches are working fishermen's territory. Despite the umbrellas and lounge-chairs for rent, and the endless number of seafood restaurants that line the boardwalk, the characteristic sight remains the hand-fishing. Huge nets are paddled out to sea in wooden boats, then later pulled in from shore by a group of men in a tug-of-war formation. At times, call-and-response singing aids this work. As the net gets closer, some of the men hop into the water, and, from inside the net, slap the fish down! The boats not in use are brought right up unto the beach. Meanwhile, a huge crowd will gather around as the contents of a net is finally revealed. It's a variation on the "Chinese fishing nets" of Fort Cochin that I'll forever associate with being in Kovalam. 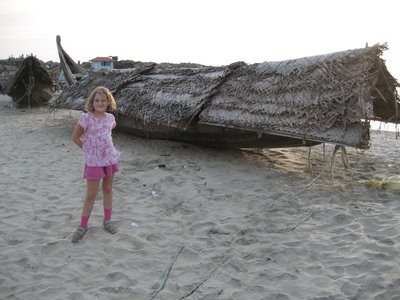 Anica with one of the fishing boats parked on a beach, Kovalam

Meanwhile, the touts and hawkers continue to call to us. It's frustrating, but there have been a few purchases we took advantage of. Here, you can "rent" books. You pay the given price for a used book, say 250 rupees, and if you return it, you get back all your money minus 10 rupees per day. Kind of like a library run by people who don't trust anybody. Well, they're losing money on us. Jenn and I can read a book a day sitting by the pool, so we've been only paying 10 rupees (that's 26 cents) per book!

The pool here is lovely and clean, and the people staying here are quite nice, almost all British, here on package deals by the week. We've found a couple of restaurants that are a cut above the others. One is called "Fusion" and has a three page menu ("East," "West" and "Fusion"). The other is called "Waves, the German Bakery," which has Indian and "German" dishes. One night, at Fusion, we saw a couple who were in Kumily (staying where we did) and Varkala at the same time as us. It turns out they're Canadians, from Montreal. They're on a six-month trip, and our stops overlapped at these three locations. We'd never talked before, but the mutual feeling of "are we following each other" got the better of us.

On our last day in Kovalam (seeing as how we left at 4 AM the next morning), we walked up the 142 steps of the lighthouse, accompanied by Bev and Steve, an English couple also staying at Hotel Thushara. We were rewarded with a spectacular view - and it was a perfectly clear day. On the way back, all five of us tried to thread our way through untested laneways. We promptly got lost, emerging, laughing, just a few feet down the beach from where we started. The labyrinth won again!

Finally, before we leave India, I must mention "Kukure." We have become addicted to this Indian junk food (which, if you read the fine print is manufactured by "Pepsico"). It started in Goa, when I was buying a pack of Lays "Magic Masala" chips, and the girl at the counter cracked open a pack of Kukure "Masala Munch." They look like Cheetos (for you North Americans), but are much spicer! Jenn and I both have had Kukure throughout India since Goa.

We found a lot of restaurants in Varkala, but here we've only found two super good ones, called Fusion, which has fusion, west and east (yum) and Wave also known as the German bakary which has quiche for Mummy. For Daddy, fish fried in local spices. And for me, frankfuter susges with hot mustard (not very hot) and baggute.

The beach isen't very good but our pool is good!

There were no Dairy Milk Fruit and Nut bars or any Dairy Milk product in Varkala, only Mars, Snickers, Country (a sort of cocunut choclate bar) and Saifari a choclate bar with chocolate, marshmellow cream and wafer). And Mommy likes it here because they are.

"A List of Important Tips to India by Anica for Daddy and Mommy, Published 2007"

Tip #1 Always get Kukure Masala Munch whenever you can get them, not Lays!

Tip #2 Never give money or food to beggars because they might be faking it. Who knows if they are?

Tip #3 (This one for Mommy) Stop getting mosquito bites!

Tip #4 Do not go to Trivandrum; Mumbai is enough for big cities.

Posted by jennrob 20:53 Archived in India

Anica: Love the book you are writing on travel tips for your parents! Also love our menu choices. Jenn and Rob: The books I took to Asia were 10 cents US from our library! Best wishes for a wonderful hoilday season and a 2008 reunion (tour!) This afternoon we saw the film Alvin and the Chipmunks, so hum a few bars of their Christmas song.

Hi Rob, Jenn & Anica,
We were so glad to hear from you again. Anica's tips are really great and she seems to be happy finding her "western" chocolate bars. Kovalam sure has interesting sites--nice to have a good pool too. Have fun getting to Cairo on the weekend.
Love & hugs,
M&D, H&D, N&G xxxooo

Love the tips Anica! Again with the food!!! Junk food in any country is heaven to me. Sounds like you're more comfortable with your Indian surroundings now. Rob, I write this on your birthday and I think you are in Egypt now so I hope you are doing well and have enjoyed your birthday.
Love always,
JBWL