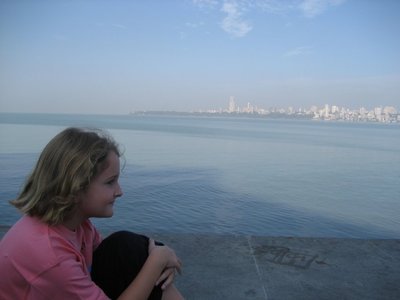 Anica looks out over the bay from the Marine Drive boardwalk, near Nariman Point

Mumbai was our last stop in India, and we were anxious to get some errands done (buy warmer clothes and Christmas shop for Anica) and then move on smoothly to Egypt, so we weren't expecting to get much out of time there. Fortunately, or unfortunately, Mumbai did not inspire us to wish we had more time in it. Mostly, it's filthly. Nowhere else we've been in India, not even Agra or Delhi, has the dirt and the poverty so evident. From right outside the airport, Mumbai has pockets of squatters' shantytowns wherever there's space available. Some look semi-permanent, while others are just a spot on a sidewalk. Two whole families lived on the sidealk across from our hotel, the boy (perhaps three) had no pants. And they weren't beggars; they just didn't have employment enough to afford somewhere to live.

Some children, and adults, sell Santa hats this time of year. There was an article in a local newspaper explaining how they have no idea who Santa Claus is, just that they will be able to sell these hats in December. One child was asked why he wasn't in school. He said, "if I'm sitting in school, who will earn for me?"

It's surprising, then, that the hotels don't hide the newspapers from their foreign guests, considering what stories get printed. We got not one, but three newspapers delivered for free to our door each morning. We read about the goats in Mumbai (and we'd seen them, in a city of eight million people, there are few good places to stable a cow or goat) that were brought to the city to be ritually slaughtered for the Muslim feast, but then got so sick, they weren't healthy enough to be killed. So the vet hospitals are filled with goat!.

And there was the story about a rapidly-growing city near Mumbai that now has 33, 000 millionaire residents. A staggering 15% of the population of that town are millionaires! That's where they're hiding, we thought. There is wealth in Mumbai itself, too: a non-descript Nariman Point's penthouse recently fetched a record price of over 30 million dollars.

At the same time, however, the largest shopping mall in India, Crossroads, has just shut down. That made our Christmas shopping more difficult. But we found some good areas to do our shopping, with department stores and bazaars.

Yes, the hotel. This was another trip back in time to the 1950s. There was an elevator operator, for instance. The "Chateau Windsor," near the Churchgate Railway station, was actually a pretty good place to stay, but seemed so overpriced at $90 a night. That's Mumbai, I guess, compared to the prices we'd enjoyed in Kerala. In the neighborhood of Churchgate, there was a nice grocery store, a bakery (called Gaylord's), a pizzeria (called Pizzeria), and a couple of English-language bookstores (an "Oxford", and "The Strand"). So we did find some familiar big-city conveniences, but not an abundance of them.

Just down the street there was a huge, Art-Deco movie-bouse called The Eros. We managed to see "Jab Me Met" (the title is an example of Hinglish) on the last night of its seven-week run in this cavernous theatre. It was understandable enough and quite entertaining, our second-favourite Bollywood film on this trip (Om Shanti Om is still #1!). Also, on the day we left, we killed time by seeing "Bee Movie" in a shopping mall's multiplex. I think it just opened this week here. "Bee Movie" had an interval (intermission) even though it was far shorter than the typical three-hour Bollywood movie. At both films, we all stood for the Indian national anthem. Our waiter today said he'd interviewed with Farimont to work in Canada..."somewhere that starts with s," he said. For us, it's not home to Canada yet (nope, not even halfway done yet), but on to Egypt.

Title: "Eeeeew! Indian cities! Grrrooosss! Beggars, hockers, what else? Even just after five hours, we wanted to go to Cairo"

We had just arrived at Mumbai International airport when we were flying from Kovalam in India! (Because for some - weird - reason Air India wants you at International departures in Kovalam and Mumbai international for landing!) So we got an ordinary taxi (for them at least) and said "Windsor hotel, please?" "Yes." But what could happen next? So when we were about there I said Mommy we just passed a Pizzeria and according to these (guidebook) pages that's on the street our hotel's on! And..before we knew it we were in Colaba! But when we finally got to our hotel (45 minutes later) and got out and walked away our driver was probably thinking (by the look on his face) "why didn't I get a tip?" So we checked in and walked down to our room since reciption was on the fifth floor and our room on 2nd floor. Beatiful room, one bed, sitting area, tv, desk, fridge, hot water, and clean! (too). So we went to the Pizzeria and had a lovely lunch of garlic cheese bread for me and pizza for Mommy and Daddy, walked around, looked in shops, had dinner, Good Night.

Posted by jennrob 08:08 Archived in India

Hi Rob, Jenn, & Anica,
It will be put down as one of your "experiences" but we're glad you're out of India. Anica, your journal was particularly well done, with your feelings so clearly expressed.(Sound like a teacher, don't I!) MERRY CHRISTMAS!

Too bad your experience of Mumbai was so negative. It's one of my favourite cities and is one of Jess and Lara's too from their trip there! Such a personal reaction, I suppose. I consider it the New York of India. . .awesome for walking, great vibe, great restaurants and superb architecture. Similarly, NY has its dirty areas and poverty, too.

Mumbai will be on my itinerary for my third trip. . .

However, it's good that you've moved on to Egypt. It'll give you a fresh start and renewed energy. Best wishes for a Merry Christmas!

Hmmmm. I have to say that I thought Mumbai was quite pleasant having been to Egypt! Could be the 'India fatigue' that afflicted us in Delhi - fed up with the taxi drivers with no local knowledge(!) and too excited about where you're going next. Take care of your tummies in Egypt and I hope you meet a fun crowd for Christmas on the tour. It's Christmas Day already here in Thailand and thanks to Santa we were up early enough to see the sunrise!!
Happy Christmas, all love CRFS xxxx

Anica, Love your journal entries! Santa found us at my dad's home. Jaclyn kind of saw Santa. We have used google earth to see Cairo, haven't seen you walking down the street yet!

Thanks for the well-wishing everyone. We are enjoying Egypt. Stevie, we know we didn't give Mumbai much of a chance - just 3 nights, and mostly errands,shopping. But I do love NYC, so if it's possible can find an India version of that it Mumbai, then that would be cool.