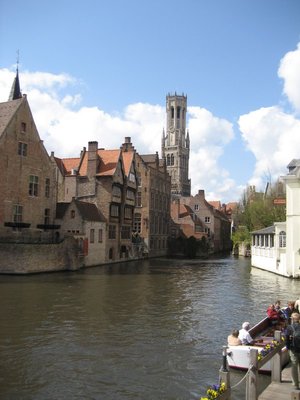 Add a new nominee to our "Favourite Small City in Europe:" Bruges. Actually, go ahead and give Bruges the award. This is such a picturesque city that it even tops Rothenberg. It's like travelling back in time, except there's no garbage, smell, or plague! The quantity and quality of jaw-dropping medieval/early-modern buildings ("look! there's a house from 1662," etc.) can be explained by Bruges' decline after their golden era (no new building) combined with being miraculously spared in both World Wars (no destroyed buildings), and then being discovered by tourists (upkeep of buildings). This last factor is probably the only downside to Bruges. The city is on every tour group's itinerary. I imagine in the summer it would be worse. The best time is around 5 PM, when the stores are still open, and the tour buses are gone. Then, it's mostly the local population out shopping, bicycling and walking home, and showing the rest of us the real character of their city. 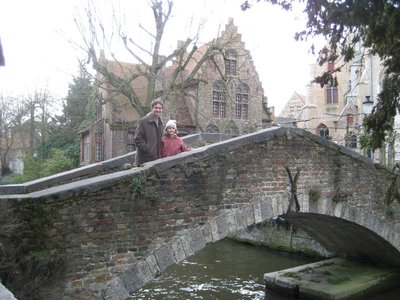 Of course, being Belgium, this is a great place for chocolate, with over 40 chocolate stores. And it's equally known for beer. Something for everyone! Jenn liked sampling the 40 or more chocolate shops. Anica did too, and supplemented that by visiting a couple of candy stores. She even had a ride on the "May Fun Fair" that's set up in a couple of the town squares. It looks funny to see the modern midway rides with their flashing neon signs ringed by sedate old storefronts. As for the beer, I got to sample a couple of the 250 beers (and they're all Belgian) in one of the pubs. The "menu" several pages long.

On our self-guided walking tour today, we passed through a 13th century "Beguinage," where widowed and unmarried women could safely live in centuries past. Just as old was a (shockingly beautiful) alms-house complex, that still provides low-income housing. 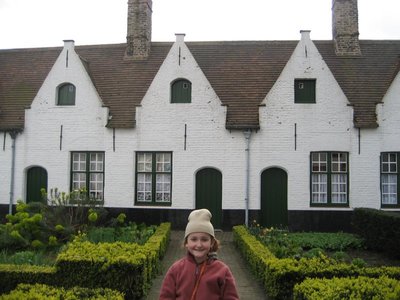 Anica amid the medieval alms-houses

We walked over quaint, low bridges (Bruges is also known as the "Venice of the North"), past locks and sluice-houses, into the grand "Markt" square, with its belfry. 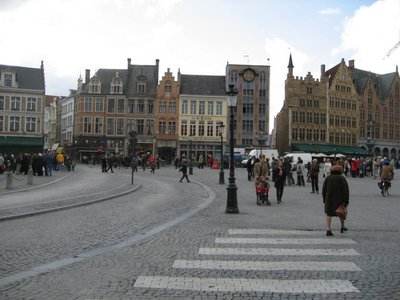 We went into one museum: "Choco Story". Newly-opened, it tells the history of how chocolate became associated with Belgium, with the requisite demonstrations and free samples. We were guided by Anica, reading aloud from the brochure (often at the top of her lungs), which was called "Bruges - Children Allowed." Nice translation of "Kinderen Toegalten!" I guess it's better than "Bruges - Children tolerated, if you insist."

Bruges might not seem welcoming to a vegetarian either. Fortunately, we're meat-eaters. Last night we had spare ribs at a restaurant called "Die Hobbit." It was somewhat themed after Tolkien, but actually is a cozy, busy place with great food and a great sense of humour. Their menu took magazine ads from the 1920s and inserted the word "hobbit" into them. My brother-in-law, a big Tolkien reader, would get a real kick out of this place!

Today's dinner ranks with our "world's bests." Nothing fancy, just delicious chicken. For you Canadians, it's like Swiss Chalet got to open a franchise in Heaven, but only because they promised to raise their standards to heavenly levels. The restaurant was actually called "The Chicken-In." Perhaps I have a simple palate, but all three of us were saying the same thing: this is one of the best meals we've had anywhere on this trip.

"Children Allowed instead of Children Welcome!"

...and the almost losing of my purse. First, today we walked to the informatin and concert hall. we got our number and sat down till it came. Finally 35 came. We asked for a children's walk around Brugge. We saw a lot of stuff on the children's walk including fountins, catedrals and lots more. Plus we gotme two candys! a litle gummy minni cake and a huge candy stick which was sort of multiflavered. And we saw a statue with (of course) a barenaked lady on a horse with a Brugge horse driver! After having Belgian waffles (not as good as Daddy's Belgian waffles) and sandwiches with chips for lunch, I diden't know I left my purse! Luckily the guys were nice and handed it back when I came in again. After the walk we went to the Chocostory, a mueseum where we tried chocolates, saw a demenstratin and I got a game where you have to put the right stickers on the correct number to win a prize. I chose the pencil instead of a praline (or whatever), lollipop or key chain. For dinner we had a 100% good, 100 stars chicken with fries and stewed apples at a freindly, yummy, nice restaurant. Chicken-in. G.N!

My students and colleagues were with me today, in my heart and mind, as we went on the best Canadian History "field trip" ever. To Flanders Fields. To Ypres. Passchendaele. The very names ring out to anyone who's studied World War I. But to today's students, it seems so distant. It's practically vanished from living memory. Here, though, it's everywhere. It's like the Great War just happened. In Ypres, we saw the Menin Gate, where every night (every single night!) they stop the traffic and play "The Last Post." What struck Jenn and I were the entire walls at the Menin Gate filled with the names of the Canadian dead. 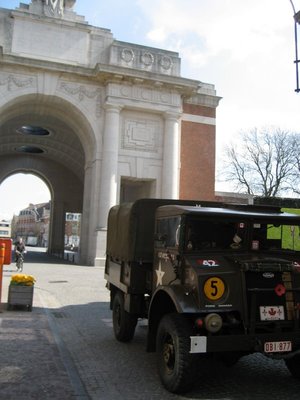 Ypres rebuilt itself after World War I, in the same medieval style. Their famous "Cloth Hall," a beautiful Gothic building, stands again. Housed in it is the "In Flanders Fields" museum, named for a poem by, yes, yet another Canadian. They do a good job explaining how futile the "Ypres salient" was. The gimmick of the museum is an identity ticket, that you put into a computer slot as certain points. It tells the real-life story of someone affected by the war. Anica had a nurse, who survived and adopted an orphan, Jenn had a nurse who was killed by a munitions explosion, and I had a British soldier who made it to 1917 before being killed. 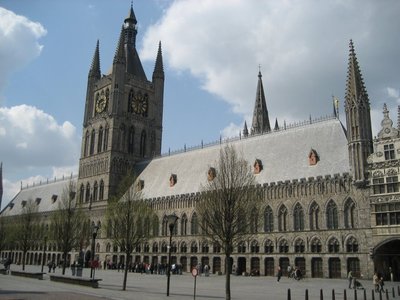 The rebuilt Cloth Hall in Ypres

Near Ypres (Ieper in Flemish), after driving through Passchendaele, we went to the Tyne Cot Cemetery. It's the largest Commonwealth War Grave. 12, 000 British, Australian, Canadian, New Zealand and Newfoundland graves. Many are unknown soldiers. About 900 are marked with a maple leaf as Canadian. I took pictures of representative tombstones: different ages, different epitaphs. There is also a huge, curving wall called the "Memorial to the Missing." 35, 000 names are there. What's really sobering is that there are 75 Commonwealth War cemeteries in the area around Ypres. Half a million lives were given up here in order to trade eight kilometres of soil back and forth. Much of rebuilt Ypres bears dates from the 1920s and 1930s on its facades. What must they have thought when the Second World War began, not even a generation after "the war to end all wars?" 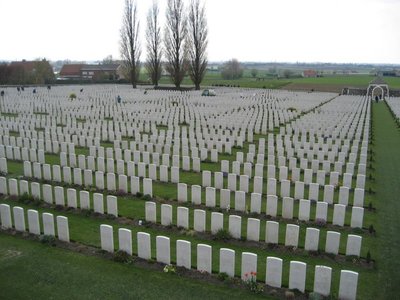 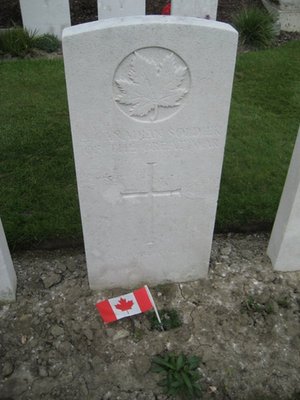 One of the many unknown soldier graves at Tyne Cot

Just up the road from The Tyne Cot Cemetery is the "Canadian Memorial" for that area. It's the "St. Julian" statue of a "brooding soldier," very impressive, to mark the 3,000 casualties near there in one of the gas-warfare battles.

Our final stop was to a section of the "Yorkshire Trench" that they have excavated and re-created. It's sandwiched between huge, modern factories. The trench is not big, but it's completely open and free (in fact we were the only ones there), and we did get to climb down into the trenches, swat flies and see the naturally-putrid water that's risen again at the entrance and exit to where the "Deep Dugout" was. The trench is from 1917. Planks, at the same site, mark the land in 1915 where a first set of trenches were dug. There's only a few feet between them.

Today we went to Ieper. When we first arivved we did a war museum. I diden't like it that much because every half hour in one room theres all-of-a-sudden bomb nosises. But the rest was o.k. Things I never knew: the Christmas Truce - what a funny thing to do

And lots more! They gave you these cards with different peoples names where you get to find out about there life. My girl died at 60, Mums 20 something, Dads 30. Mine died of illneis, Mums shell bomb, Dads, I can't remember! Had lunch and went to my favrite site that day! The Tyne Cot Cemetary. It had war soldiers buried from Britain, Canada New Zealand, Newfoundland, and so on. Half are unindentified! Went to the trenches, went home, had dinner, G.N.!

Another self-guided walking tour of Bruges today. Cold, but sunny. Through a lesser-known, but almost as picturesque area. The oldest inn/pub is from 1515. Another building from 1493. Former trading houses of merchants from Lucca, Spain, even the Orient. In keeping with the international theme, we had lunch at an Egyptian restaurant. Anica likes middle eastern food, and said today that Egypt may have been her favourite country to visit. We shopped, including getting stuff for dinner, back at the Bonobo Hotel, where we have the one-bedroom self-catering unit. Our windows look out on a cobblestone alley and a church's belltower. 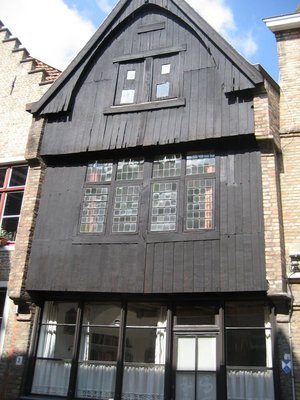 One of two original wooden facades from 16th century Bruges