and how we got from there to here

[NOTE: We've added photos, and Anica's writing, to the Bangkok entry since it was first posted]

Sometimes it really is all about the journey. We had decided to go "overland" (i.e. hire a car/driver) from Bangkok to Siem Reap, Cambodia. This is a long car trip, with a border crossing full of red tape, and a very spotty road on the Cambodian side. It was a trip we were worried about, and thinking of as something to get past. It turned out to be an unforgettable experience. 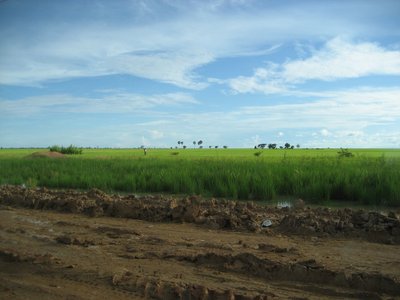 View from the car on the road from Poipet to Siem Reap, Cambodia

First of all, the taxi driver we hired in Bangkok on October 12th actually did show up on time, and turned out to be a great conversationalist. His first name was Arom, and he spoke very good English. He had as many questions about us and Canada as we did about Thailand, especially after it emerged that we were travelling around the world. It scarcely mattered that the drive was three and a half hours (a little longer than we thought), as we talked with Arom the whole way. He also did his best to help us find the way to the right place at the border, even taking us on foot as far as he could legally go. 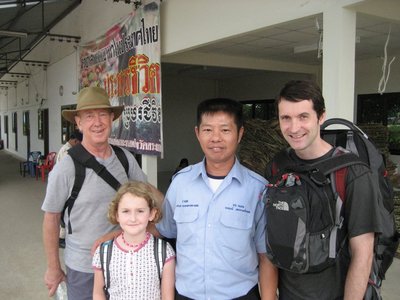 With Arom, our Bangkok to the border taxi driver

The Cambodian side worked out well, especially with our e-visas in hand, and our contact from "Two Dragons Guest House" in place to show us the steps. After a short bus shuttle, we were shown to our car and met the driver who would take us to Siem Reap. Unlike Arom, he spoke no English. The drive could take anywhere from 5 to 8 hours. Off we went.

One muddy, bumpy road. Flat. Very few curves. How could it be so fascinating? 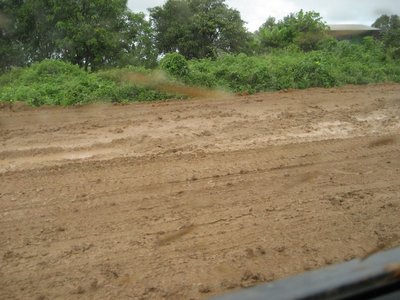 A typical stretch of the road from Poipet

The hours flew by just because, as we looked out the window, there was so much of Cambodian life filling our view. My parents tell me that, in Switzerland, you could almost point your camera anywhere and have a picture postcard shot. Well, without even leaving the car, on this Cambodian road, anywhere you pointed your camera seemed to produce a National Geographic cover shot. The "traffic," for instance, was filled with pickup trucks being used as mass transportation, 20 to 30 people packed into and onto them. 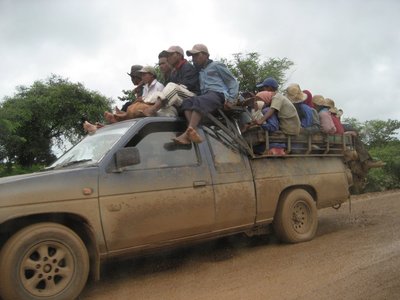 Not a Guiness record attempt, just a typical pick-up truck passing by

Cows and water buffalos caused slowdowns. Wherever the water in the ditches was deep enough, children swam naked, and people of all ages waded in with their clothes on. 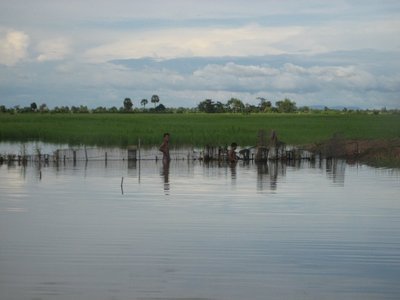 It's still the rainy season, and bathers take advantage.

A "gas station" meant a rack of old Pepsi bottles at the side of the road, filled with gasoline. Sometimes our conversation halted because it got so bumpy we couldn't talk. 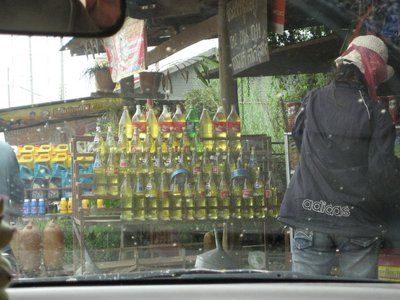 Eventually, our driver called out "toilet?" and we made our only brief stop. A young boy washed the mud off our car. About two hours after this stop, we arrived in Siem Reap. It was just about 6PM, 11 hours after we left Bangkok. We were shocked to see the many luxury hotels after hours of seeing people living in stilt houses best described as shacks. Our own guest house was much more modest, but still clean and welcoming. Gordon, the owner, had turned out to be a great contact that Jenn developed through her on-line research.

Today we got in a taxi to the Border. it took from 7:00-12:00 (noon). stopped for a snack break along the way. When we got to the border between Thailand and Cambodia, it took us 45 min to get past (even with e-visa). Wow.

Then taxi to two dragons guest house. it was about 5 hours (on a really bumpy road). finally got there and had dinner and choco ice cream. Good night. I mean it.

We've seen many incredible things on our trip so far, but Angkor Wat is now my favourite. Actually, not just "Angkor Wat," which is a specific temple complex, but the Khmer temples of Angkor in general, which we have spent the last two days touring. At eight hours plus per day, we saw many different temples. Like the Great Wall of China, this is a physical experience; you don't just "see," you climb, you duck your head, you sweat. We had an official tour guide and a driver, which was great because the tour guides are very knowledgable and well-trained and know exactly how to get you around to all the best temples and views. We started, for example, with Ta Prohm. Other than the towers of Angkor Wat, this is the classic overgrown jungle atmosphere: huge trees, and tree roots growing up, through and around the temples. 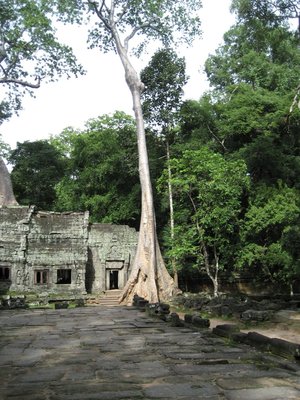 Most of Angkor is not like this, we found out as we continued. Instead of overgrown and claustrophobic, the grandest complexes are still spacious and commanding. They were never forgotten by the Khmer people, although they did fall into disrepair. 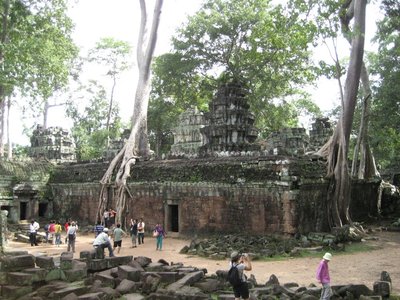 After that, we entered Angkor Thom. It is the ancient capital, contained by a moat that is a 14 kilometre rectangle, 100 metres wide. One of the gates to the ancient capital, Angkor Thom

Inside, we saw several temple areas, including the very steep and high Bayon temple, where a staircase has been built on one side for people to climb. Even that is very steep. 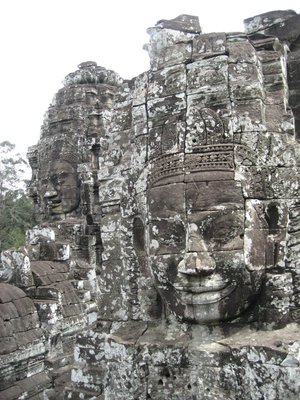 One of the famous faces of the Bayon temple

The highlight of the afternoon was going to Angkor Wat, with the famous view from the causeway. The bas relief carvings in the galleries are the main interior feature, and tell the story of the Hindu epics. Our tour guide was very enthusiastic and detailed in describing these. In fact, it was too much, even for me, let alone Anica, to be able to follow or keep interest in. 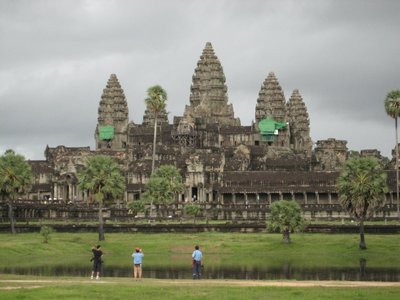 The second day provided us with an idea of the variety and distance that the temples cover. Banteay Srei, for instance, was about 35 km to the north, and did not rise high, but receded through doorway after doorway, covered with intricate sandstone carvings on each lintel. 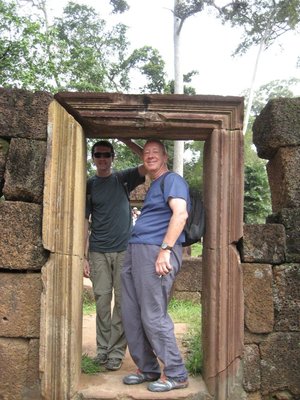 Banteay Samre, next, was several kilometres east of all the others, and similar to Angkor Wat, except that its causeway extended into the jungle and not over water. 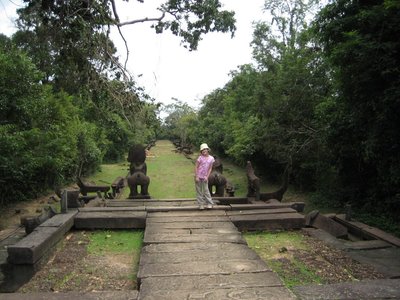 Anica at the Banteay Sempre causeway

As we entered, school children in white and blue uniforms waved as they passed, skirting the temple walls on their way home for lunch. Other children hawked products with a hard sell and hardluck tale. Some have memorized facts about every country to impress potential buyers. A boy gave me this spiel, in one breathless litany: "Canada. I could say hello in your two official languages, English or French. Population 35 million. Your capital is Ottawa. Do you have a loonie, toonie, quarter, dime or nickel? Buy my book. Just five dollars. You need water? One dollar." Well, he knew more about Canada than many of our American neighbours seem to, that's for sure.

Neak Pean temple really stood out, with its circular structure inside a drained moat. It used to be a "hospital," and four doctors' huts still stand at the forest's edge. Each direction of the compass had a different animal's-head shrine, from which people drank holy water to be healed. 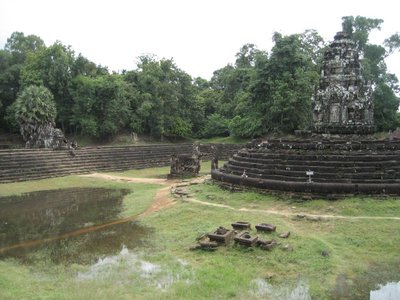 The centerpiece of Neak Pean temple

East Mebon temple, also very tall, once towered over a huge resevoir, so it was fun to stand at the top and imagine the extent of the waters. 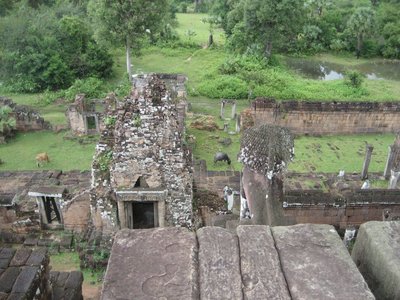 We finished with Preah Khan, which was one too many for Anica, and Jenn stayed behind with her while James and I soldiered on. 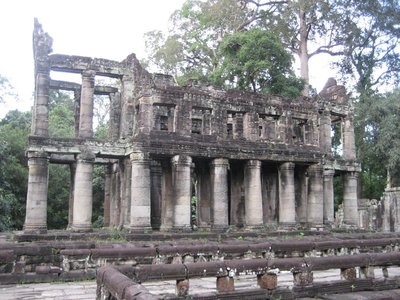 Anica, although she seldom listened to the tour guide, showed amazing endurance in the heat and humidity of our long days. She loved the climbing and the views, and was patient with the religious and historical details.

Meanwhile, the city of Siem Reap has turned out to be quite charming. Two million visitors a year, most of whom arrive by plane, mean that it's quite a contrast to the Cambodia we saw on our way here. There's a new museum about to open, a theatre, and the river running through the centre of town is well-maintained as a park and its bridges are lit with twinkling white lights at night. There's also a sign in front of the hospital, however, which calls for blood donors because of a "hemmoraghic dengue fever epidemic."

Our guest house is clean and comfortable, and there are many restaurants to choose from nearby. Our time here has been made more memorable by meeting a family from Holland with two kids. Their daughter, Marisa, is the same age as Anica and their son, Igor, is four. Great people! After spending two evenings together, we have made plans to see them again in The Netherlands in the spring. They are on their own world trip of six months, and have been mainly in Thailand and Vietnam so far, with two months in New Zealand coming up, so we had lots to talk about. James (Jenn's Dad) has even more travel experience and wisdom, so we all like to hear his perspective. Last night all eight of us walked into the old market neighborhood and had a pizza dinner together at "Escatic Pizza." It was the first time we'd had non-Western food in several days, and the little local Italian/Khmer place was a great way to get to know each other better. Ignoring the advice that we needed tuk-tuks to get back to the guest house, we walked, with the help of James' flashlight. All three kids, however, are veterans of Hanoi's motorbike traffic, so Siem Reap is positively quiet in comparison.

This third day in Siem Reap will be about sleeping in, resting, and seeing more of the Old Market/downtown area during the day. It's funny, by the way, that the de facto currency of Cambodia is the U.S. dollar, and for the first time in years, the Canadian dollar is at par or better in comparison. Great timing!

Today we got to see some Temples. One, Ta Prohm, a big one with tree roots and lots of other things. Then went to elephant terrace with no elephants in site. then we went to one called Bayon with a big staircas and steap steps. then went to Angkor Wat, beatifull, but then it was only a Hindu pic gallery [inside]. My faverite temple was Bayon because of staires. Good night.